A TIME TRAVELER'S THEORY OF RELATIVITY
by Nicole Valentine 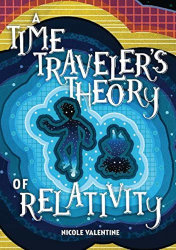 Finn is used to the females in his family disappearing. His twin sister Faith drowned when they were both only three years old, leaving a hole in his life that feels like it can never be filled. His mom abandoned him and his Dad just a few months ago, without so much as a note. Finn tries to cling to the concrete facts in his physics books and to his best friend, Gabi, to ward off his sadness. And then his Gran passes away. It feels like it’s just too many losses. But right before Gran passes, she tells Finn a family secret: the women in their family are Travelers. His mother is actually trapped in time and she’s left Finn a portal to find her, a single tree on the top of Dorset Peak in Vermont. If Finn is going to be able to find his mom, he’s going to have to put aside logic and science, and trust in the implausible.

About the author: Nicole Valentine is a graduate of the Writing for Children and Young Adults MFA program at the Vermont College of Fine Arts. She writes full time and teaches at the Highlights Foundation. Nicole was the Chief Technology Officer of Figment.com, an online writing and reading network for teens, which was acquired by Random House in 2013. Her short story, “The Weeping Beech,” can be found in Oermead Press’ anthology, Chester County Fiction. Find Nicole online at nicolevalentinebooks.com and @nicoleva

Praise for A TIME TRAVELER’S THEORY OF RELATIVITY:

“This novel will stretch your both your brain and your heart at the same time. Find the thread and jump in. You’ll be so glad that you did.” – Kathi Appelt, author of Angel Thieves and 2013 National Book Award Finalist The True Blue Scouts of Sugar Man Swamp

“I can't get enough of all the potential ramifications of A Time Traveler's Theory of Relativity! Nicole Valentine has taken two knotty subjects and woven them together in an excellent adventure that pulls at the heart as much as the mind. Finn and all his complex family (families?!) have so many stories to tell, and I'm wishing them well on their adventures!” – Fran Wilde, award-winning author of The Bone Universe series and Riverland

“This is an incredible book, no matter which time universe you're in. I couldn't put it down. One of my favorite debut novels of the year.” – Erin Entrada Kelly, New York Times bestselling author and 2018 Newbery Medal-winner