QUEEN OF BONES
by Teresa Dovalpage 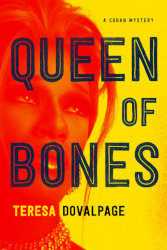 • A procedural set in Havana that steps into a void of fiction about Cuba, an area of interest to readers all over the world.

• Dovalpage, a native of Cuba who lives in New Mexico and writes in English, channels her background in the rich cultural and at-mospheric details.

• Dovalpage has been published extensively in Spanish.

Padrino, a former detective on the Cuban police force, has retired and found a new, happy life as a Santería priest. But he is drawn back in for a murder investigation when his goddaughter, Rosita, who works at the local cemetery, recognizes one of the bodies that crosses her embalming table.

Meanwhile, an old flame of Rosita’s, Juan, has returned to Cuba after flee-ing by raft twenty years ago. He is with his American wife, Sharon, and has come back to catch up with his old college circle—Victor, his estranged best friend, and unbeknownst to Sharon, his most serious ex-girlfriend, Elsa, with whom he never quite fell out of love.

When murder occurs within this group, it will cost Padrino more than he expects to untangle everyone’s lies and track down the killer.

Praise for Death Comes in through the Kitchen

“A bittersweet portrayal of Cuba in the last years of Castro’s reign.”—Lorraine M. López, author of Homicide Survivors Picnic and Other Stories and The Darling

“You've never read a mystery like this one!... Love, murder, food and poli-tics form a deliciously dark and funny stew.” —Chantel Acevedo, author of The Distant Marvels

Teresa Dovalpage was born in Havana, Cuba, in 1966. She earned her BA in English literature and an MA in Spanish literature at the University of Havana, and her PhD in Latin American literature at the University of New Mexico. She is the author of twelve other works of fiction and three plays, and is the winner of the Rincón de la Victoria Award and a finalist for the Herralde Award. She lives in New Mexico. https://teredovalpage.com