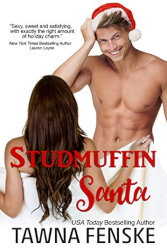 About STUDMUFFIN SANTA: Book 1 novella (November 2017): Brandon Brown is the unlikeliest Santa ever to don a red velvet suit. His abs are more cheese grater than bowl full of jelly, and deploying to Syria is the closest he’s come to the North Pole. But family drama sends the jaded Marine home for the holidays, and lands him an unexpected gig as a part-time Santa. Jade King is hustling to get Jingle Bell Reindeer Ranch off the ground, and she’s not thrilled her sister hired a Santa with sex-appeal. The last thing Jade wants is a beefcake circus, and guys like Brandon bring sleigh-loads of trouble. But Studmuffin Santa proves more popular than anyone dreamed, drawing hordes of happy kids, lusty moms, and a mystery foe hell-bent on wrecking it all. The threat has Brandon playing protector for the reindeer and their sexy keeper, which is risky for a guy who’s sworn off happy endings and the whole Christmas mess. But as Jade and Brandon bond over Santa suit malfunctions and risqué Christmas cookies, they find they have more in common than a craving for gingerbread. Can they find a way to mesh their wish lists, or will ghosts of Christmas past bring things crashing down like a fat man in a cast iron sleigh?

About CHEF SUGARLIPS: Book 2 (May 2018): Sean Bracelyn can whip up a saffron-laced lobster risotto in his sleep, but relationships? That’s one recipe he hasn’t nailed. Not that he has time, between launching a new restaurant and building a luxury resort with his awkwardly-blended family. But when his dream girl nearly knocks him unconscious with a dead turkey, it’s all Sean can do to keep his eyes on the gazpacho and off Amber King’s perfect curves.

Amber’s done with guys propping her on a pedestal. Transforming her family’s reindeer ranch into a country chic wedding venue is consuming enough, and the last thing she needs is an extra serving of love drama. So what is it about the stupid-sexy chef that gets her desires bubbling like a pot of hot spaghetti?

Keeping their distance is tough enough before Sean and Amber get tossed together by wacky weddings, lingerie mishaps, and a surly three-legged cat. When Sean’s mom shows up to dish out huge helpings of family drama, a big secret threatens to spread faster than a kitchen fire.

Can Sean and Amber find the right blend of sugar and spice, or will love fall flat as a burnt soufflé?

About SERGEANT SEXYPANTS: Book 3 (October 2018): Bree Bracelyn doesn’t date cops. It’s a personal rule that quavers when Austin Dugan flashes his baby blues—and his badge—at Ponderosa Resort’s grand opening. Bree’s the family fixer, running the resort’s PR and her siblings’ lives with cheerful efficiency. But one thing in Bree’s past can’t ever be fixed, which is why she’s staying the hell away from Officer Hottie. Austin’s heart tacks up a wanted poster with Bree’s name the instant he lays eyes on her. Okay, the no-cops rule is an obstacle, but not impossible for a guy ambitious enough to be a shoe-in as the next police chief. Besides, he knows Bree’s into him, whether they’re flirting over weird flatware or getting frisky in the front seat of his vintage Volvo. As Bree and Austin bond over cupcakes and hot springs hookups, Bree knows it’s a matter of time before the skeletons in her closet topple into a messy heap on Austin’s squeaky-clean life. Is there hope for a happy ending, or will their love end up DOA?

About HOTTIE LUMBERJACK: Book 4 (March 2019): When Mark Bracelyn lumbers into Chelsea Singer’s cupcake shop with an axe, she’s poised to hit the panic button. But he fixes her door, praises her buttercream, and sends her skittish heart pounding like a hammer on a hollow log, so he can’t be all that scary. Chelsea’s sure there’s a gooey marshmallow center under Mark’s tough outer shell, though admittedly she’s been wrong before. Mark may look like a grungy lumberjack, but he’s also the wealthy part-owner of Ponderosa Luxury Ranch Resort. The lone Bracelyn heir to avoid a childhood of fancy boarding schools, he stays hidden behind the scruffy beard and battered truck. But something else separates Mark from his siblings, and keeping his guard up means keeping his secret—and his family. When someone threatens Chelsea and her daughter, Mark becomes their personal protector. When he’s not watching her back, he’s watching the rest of Chelsea’s body and warning himself not to touch. With danger mounting, they bond over phallic cupcakes and bizarre bunny behavior, while Mark battles his surging attraction. Can a sweet-toothed mountain man and a cautious single mom escape their histories, or will their hearts land on the chopping block?

About STIFF SUIT: Book 5 (June 2019): James "Iceman" Bracelyn is wound tighter than a vintage Rolex. Besides his CEO role at Ponderosa Resort, he's guardian of the family's biggest secrets, including a doozy that keeps him up at night. Alone. In that big bed he'd rather not share, thank you very much. That's fine with Lily Archer, who likes her flings flaming hot and fleeting. Her man-eater rep might be slightly exaggerated, but she'll gladly dial it up to rescue James from himself—and a bottle of Glenlivit—at his brother's wedding. Intimacy's the last thing either one wants, but it's tough to dodge when they're drawn together by the world's drooliest dog, a TPing escapade gone wrong, and a good old-fashioned desktop hookup. That's problematic for James, whose ability to hide the family's riskiest secret is complicated by the secret's refusal to get the hell out of his guest room. Can Iceman keep his frigid shell intact while falling for the hottest science geek sex goddess he's ever met, or will the ticking time bomb blow it all to smithereens?

About MAN CANDY CRUSH: Book 6 novella (July 2019): Josh Mattis is totally over getting his heart stomped six years ago, so what’s with the mule kick to the chest when he spots the girl who ghosted him? Turns out she’s not his teenage fling, but her twin sister—and she needs a fake date to her cousin’s wedding. Valerie Vincent would rather shove sewing needles in her eyes than have one more person tell her she needs adventure. All she needs is a quiet reading nook and a chance to enjoy Bree’s quirky Christmas nuptials in the summer sun at Ponderosa Resort. Okay, she’d also like to skip the pitying looks when her twin trots out her fab new fiancé, but Val can fix all that with one rugged river guide who’s happy to play her arm candy. As Josh and Val bond over weird eggnog and messed-up mistletoe hunts, the July sun isn’t the only source of scorching heat. Will the past be a blast of icy cold reality or can their fling last longer than a peppermint fudgesicle on a hot day?

About the author: USA Today bestselling author Tawna Fenske writes humorous fiction, risqué romance, and heartwarming love stories with a quirky twist. She traveled a career path that took her from newspaper reporter to English teacher in Venezuela to marketing geek to PR manager for her city's tourism bureau. An avid globetrotter and social media fiend, Tawna is the author of the popular blog, Don't Pet Me, I'm Writing, and a member of Romance Writers of America. She lives with her husband in Bend, Oregon, where she'll invent any excuse to hike, bike, snowshoe, float the river, or sip wine on her back deck. Tawna has published several romantic comedies with Sourcebooks, including Making Waves, which was nominated for contemporary romance of the year by RT Book Reviews and Now That It’s You, which was nominated for a RITA award. She also writes heartwarming romantic comedies for Montlake Publishing, and steamy, humorous series romance for Entangled Publishing. Tawna's quirky brand of comedy and romance has won praises from Kirkus, which noted, “Up-and-coming romance author Fenske sets up impeccable internal and external conflict and sizzling sexual tension for a poignant love story between two engaging characters, then infuses it with witty dialogue and lively humor. An appealing blend of lighthearted fun and emotional tenderness.” She’s also received starred reviews from Publishers Weekly. http://tawnafenske.com/

What’s next: CAPTAIN DREAMBOAT: Book 7 (Jonathan's story) is tentatively slated for fall, and DOCTOR HOT STUFF: Book 8 (Bradley's story) will be sometime in 2020. The author may continue the series even further.