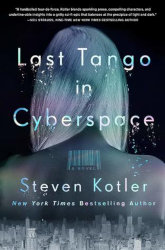 Hard to say when the human species fractured exactly. Harder to say when this new talent arrived. But Lion Zorn is the first of his kind--an empathy tracker, an emotional soothsayer, with a felt sense for the future of the we. In simpler terms, he can spot cultural shifts and trends before they happen.

It's a useful skill for a certain kind of company.

Arctic Pharmaceuticals is that kind of company. But when a routine em-tracking job leads to the discovery of a gruesome murder, Lion finds himself neck-deep in a world of eco-assassins, soul hackers and consciousness terrorists. But what the man really needs is a nap.

A unique blend of cutting-edge technology and traditional cyberpunk, Last Tango in Cyberspace explores hot topics like psychology, neuroscience, technology, as well as ecological and animal rights issues. The world created in Last Tango is based very closely on our world about five years from now, and all technology in the book either exists in labs or is rumored to exist. With its electrifying sentences, subtle humor, and an intriguing main character, readers are sure to find something that resonates with them in this groundbreaking cyberpunk science fiction thriller.

Library Journal has given it a starred review saying: “Reminiscent of Neal Stephenson’s Snow Crash, this near-futuristic setting for ancient connections somehow seem possible for our own future. Both thriller and sf, the latest from Kotler is sure to please a broad range of readers. The characters are well-developed and ultimately ‘peeled to the core,’ which makes for a fascinating read. Highly recommend.”

And Booklist says: “Kotler crafts an intriguing blend of detective story and social critique… Using precise storytelling that draws on literary and cultural references from Rastafarianism, Dune, and the works of Rainer Maria Rilke, Kotler creates a vivid picture of near-future earth. Revelations may come at a slow pace, but readers who dig in will find a story that is, at its core, an insightful view on how empathy can connect us to each other and to the living beings that share this planet.”

Also, the book was chosen as one of Amazon’s Best Books of the Month in the Science Fiction & Fantasy category for May and included in several “Best of” May roundups, including The Verge’s “10 New Science Fiction and Fantasy Titles to Check Out in May” here: https://bit.ly/2JbWthf and Kirkus’ “The SF/F/H Books Everyone Will Be Talking About in May” here: https://www.kirkusreviews.com/features/sffh-books-everyone-will-be-talking-about-may/

Rights have sold to China Machine Press in China!

Steven Kotler is a New York Times bestselling author, award-winning journalist, and co-founder and director of research for the Flow Genome Project. His books include the non-fiction works "The Rise of Superman," "Abundance," "A Small Furry Prayer" "West of Jesus," and the novel "The Angle Quickest for Flight." His work has been translated into more than 30 languages. His articles have appeared in over 60 publications, including The New York Times Magazine, The Atlantic Monthly, Wired, GQ, Outside, Popular Science, Men's Journal and Discover.

He also writes "Far Frontiers," a blog about technology and innovation for Forbes.com and "The Playing Field," a blog about the science of sport and culture for PsychologyToday.com.

He lives in New Mexico with his wife, the author Joy Nicholson.