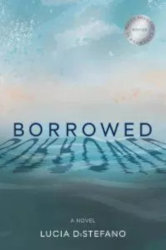 Winner of the 2018 Sheehan YA Book Prize, BORROWED is a genre-bending thriller that will take you to unexpected places.

Love, mystery, and danger collide in this new literary thriller with the dark heart of a Gillian Flynn novel and the lyrical prose of Jandy Nelson’s I’ll Give You the Sun.

As seventeen-year-old Linnea celebrates the first anniversary of her heart transplant, she can’t escape the feeling that the wires have been crossed. After a series of unsettling dreams, inked messages mysteriously appear on her body, and she starts to wonder if this new heart belongs to her at all.

In another Austin neighborhood, Maxine braces for a heartbreaking anniversary: her sister Harper’s death. Between raising her brothers and parenting her grief-stricken mother, Max is unable to ignore her guilty crush on Harper’s old flame or shake her lingering suspicion that her sister’s drowning wasn’t really an accident. With Harper as the sole connection, Linnea and Maxine are soon brought together in fantastic and terrifying ways as the shocking truth behind Harper’s death comes to light.

“This is a tale of grief, life . . . and survival told through the eyes of fascinating protagonists in a story filled with thrills and plot twists. . . . 5 stars.”—Alice Reeds, Echoes and Petty Little Lives

“A wonderfully literary feel [and] a dynamic and layered set of characters . . . make Borrowed a must-read.”—Liz Wilkins, Liz Loves Books

“DiStefano’s multiple, well-developed narrators vie for attention in this fast-paced, genre-bending thriller. Buckle up because this book will take readers on a wild and unpredictable ride.”—Maryalice Bond, Librarian at Boiling Springs High School and Blogger at BubblersRead

“Borrowed is unlike anything I’ve seen in recent YA literature—it’s a compelling, unpredictable thriller with a unique premise and delicious prose. DiStefano will be one to watch.”—Jennie Kendrick, Contest Judge, Forever Young Adult

“Borrowed successfully generates real suspense through a plot that is one part cozy mystery and one part violent psychological thriller. A literate, well-told, and original YA novel.”—Mark Pumphrey; Contest Judge; Director of Libraries, El Paso, Texas

“The premise is engaging and contains an interesting concept of memory and humanity with beautifully written prose.”—Booklist

“In the first two acts of the novel, the combination of debut author DiStefano’s lyrical prose and effortlessly nuanced characters makes for a gripping and heart-wrenching read.”—Kirkus Reviews

“Lyrical prose, full-bodied characters, and a riveting plot with shocking twists and turns that kept me guessing until the startling conclusion. I couldn’t put it down.”—Kristin Bartley Lenz, The Art of Holding on and Letting Go

“DiStefano’s mastery is in the unpredictable twists, the tense build-ups, and the satisfying reveals. This breakout debut is a rare gem of a genre-bender.”—Katya de Becerra, What the Woods Keep

A former high school English teacher, Lucia DiStefano currently works as an editor, ghostwriter, and writing coach. First-generation Sicilian-American and daughter of an olive farmer, she admits to having recurring pasta dreams. Hailing from central Connecticut, Lucia lives near Austin, Texas with her husband and an old bloodhound named Waffle. www.LuciaDiStefano.com