EXTINCT IN ORDER TO REMAIN. Dinosaurs and their Descendants
by Bernhard Kegel 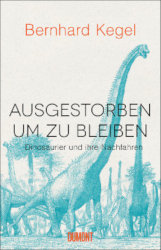 New astonishing scientific discoveries will revolutionize our image of the dinosaurs

They dominated the continent for over 170 million years, which is more than a thousand times longer than humans have existed. And they brought forth the hugest creatures ever to roam the earth. How is it possible that there are whole children’s sections in libraries dedicated to these animals, but not a single current book aimed at an adult audience? With in-depth knowledge, Bernhard Kegel shows that the image painted by scientists of prehistoric times has greatly changed over the past decades. Since the British anatomist Richard Owen christened them some 170 years ago, our concept of dinosaurs has been in constant flux. On the basis of new fossil findings and scientific discoveries, it now appears that they went through several metamorphoses, some of them drastic: from creeping giant lizard to upright dragon-like creature, and from sluggish reptile to dynamic, intelligent huntsman. And finally, in a surprising twist, from scaled lizard to giant feathered chicken. Today, we know for certain that many dinosaurs were feathered – and that all modern birds descended from them.

Bernhard Kegel’s journey of discovery into the world of paleontology, science and geology is as surprising as it is exciting.

Bernhard Kegel, born in Berlin in 1953, studied chemistry and biology at the Freie Universität Berlin, then went on to become a researcher, working as an expert and lecturer of ecology. Since 1993, he has published several novels and non-fiction titles; most recent publications by DuMont are Epigenetik (2009), Tiere in der Stadt (2013) and Die Herrscher der Welt (2015). Bernhard Kegel’s books have received several journalism awards. The author lives in Berlin.

There was an excellent piece on TV with the author: https://www.zdf.de/kultur/aspekte/videos/dinosaurier-sind-noch-unter-uns-100.html