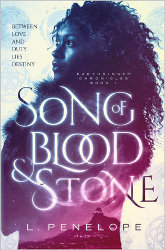 The first in a treacherous, thrilling, epic fantasy series about an outcast drawn into a war between two powerful rulers.

Orphaned and alone, Jasminda lives in a land where cold whispers of invasion and war linger on the wind. Jasminda herself is an outcast in her homeland of Elsira, where her gift of Earthsong is feared. When ruthless soldiers seek refuge in her isolated cabin, they bring with them a captive—an injured spy who threatens to steal her heart.

Jack’s mission behind enemy lines to prove that the Mantle between Elsira and Lagrimar is about to fall nearly cost him his life, but he is saved by the healing Song of a mysterious young woman. Now he must do whatever it takes to save Elsira and its people from the True Father and he needs Jasminda’s Earthsong to do it. They escape their vicious captors and together embark on a perilous journey to save the land and to uncover the secrets of the Queen Who Sleeps.

Thrust into a hostile society, Jasminda and Jack must rely on one another even as secrets jeopardize their bond. As an ancient evil gains power, Jasminda races to unlock a mystery that promises salvation. The fates of two nations hang in the balance as Jasminda and Jack must choose between love and duty to fulfill their destinies and end the war.

L. Penelope has been writing since she could hold a pen and loves getting lost in the worlds in her head. She is an award-winning author of new adult, fantasy, and paranormal romance. She lives in Maryland with her husband and their furry dependents. Her books include the Earthsinger Chronicles (Song of Blood & Stone, Whispers of Shadow & Flame).

Praise for Song of Blood & Stone:

“Readers who enjoy romance mixed with fantasy will find a bold power couple to root for as Jasminda and Jack overcome both personal and political obstacles. Fresh, suspenseful, and perceptive, Penelope’s first in a new series will appeal to historical-fantasy readers, especially fans of N. K. Jemisin’s The Hundred Thousand Kingdoms.” —Booklist

“Wonderful characters, unique setting, and an engaging romance set against the backdrop of ancient magic. I can’t wait to see what L. Penelope will do next.” —Ilona Andrews, #1 New York Times bestselling author

“Prepare to be hooked. Song of Blood and Stone is brimming with captivating lore, unique magic, and plot-turns you never saw coming. L. Penelope has written your next fantasy obsession.” —Elise Kova, USA Today bestselling author of The Loom Saga

“Set against a backdrop of myth and magic, Song of Blood and Stone is a sweeping tale of love, duty and destiny that feels as urgent as it does timeless.” —Rebecca Roanhorse, author of Trail of Lightning

“Song of Blood and Stone is an enchanting journey through a world more relevant than ever. Wars between Gods, romance, action—it’s everything I love all at once.” —K. Arsenault Rivera, author of The Tiger’s Daughter

“Song of Blood and Stone is a sweeping journey of magic, romance, sacrifice, and self-discovery. These heartwarming characters, their trials and adventures, and their love for each other will stay with you long after the book ends.” —Amanda Bouchet, USA Today bestselling author of The Kingmaker Chronicles

“Song of Blood and Stone is a thrilling and complex journey through a beautifully rendered world that is imaginative, magical, and eerily similar to our own. A terrific read!” —Daniel Jose Older, New York Times bestselling author

Jasminda is trying to survive after the death of her parents, but as an outcast in her land of Elsira—marked by her dark skin and Earthsong powers—she is poised to lose her home. When soldiers commandeer her cabin and she meets the injured spy they hold captive, she’s on the verge of losing her heart. Healed by Jasminda’s song, Jack knows that his mission has been an unfortunate success; he’s found evidence that the Mantle between the nations of Elsira and Lagrimar is a failing and that ancient evil wants to conquer both lands. Escaping from the soldiers, Jasminda must unlock the truth about her Earthsong power and rely on Jack to protect her, even as secrets threaten their growing bond. She and Jack must both face the truths about themselves, their beliefs, and their love so they can mend both nations and their hearts. VERDICT: This debut, which won the Black Caucus of the American Library Association Self-Publishing Award, shines a bright light into epic fantasy. Battle-scarred lands and peoples, ancient powers at war, star-crossed love, and hints of racial and refugee themes give this solid place on library shelves.

Penelope delivers an engrossing story with delightful characters in this fantastic opening to a promising series. Jasminda ul-Sarifor inherited many things from her father, including her magical powers as an Earthsinger and the features that mark her as a woman of Lagrimaran descent. Unfortunately, she lives in xenophobic Elsira. She’s reviled by her neighbors and has every reason to hate Jack, an Elsiran spy fleeing pursuit from vicious Lagrimaran soldiers; instead, she takes pity on him. He bears the news that the magical barrier that separates Elsira and Lagrimara is about to fail, and he must return to his superiors to warn of an impending war that could destroy Elsira and plunge the world into the despot control of the cruel True-Father. As Jasminda and Jack work together to protect their home, attraction turns their pragmatic alliance into a romantic union that won’t be denied, despite the obligations of Jack’s social and political position and the persistent prejudice against Jasminda’s mixed heritage. The tale is infused with optimism but never cloying, and it culminates in a well-earned and satisfying ending, leaving readers impatient for the next installment of the series.