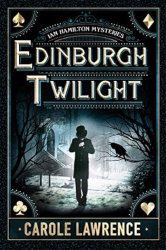 EDINBURGH TWILIGHT is a new period mystery set in Edinburgh, Scotland, in the 19th century. Book One in the new Ian Hamilton Mysteries series, it was published by Thomas & Mercer on September 5, 2017.

As a new century approaches, Edinburgh is a city divided. The wealthy residents of New Town live in comfort, while Old Town’s cobblestone streets are clotted with criminals, prostitution, and poverty.

Detective Inspector Ian Hamilton is no stranger to Edinburgh’s darkest crimes. Scarred by the mysterious fire that killed his parents, he faces his toughest case yet when a young man is found strangled in Holyrood Park.

With little evidence aside from a strange playing card found on the body, Hamilton engages the help of his aunt, a gifted photographer, and George Pearson, a librarian with a shared interest in the criminal mind. But the body count is rising. As newspapers spin tales of the “Holyrood Strangler,” panic sets in across the city. And with each victim, the murderer is getting closer to Hamilton, the one man who dares to stop him.

Author Carole Lawrence is an award-winning novelist, poet, composer, and playwright. Among her published works are eleven novels, six novellas, and dozens of short stories, articles, and poems, many of which appear in translation internationally. She is a two-time Pushcart Poetry Prize nominee and winner of the Euphoria Poetry Prize, the Eve of St. Agnes Poetry Award, the Maxim Mazumdar playwriting prize, the Jerry Jazz Musician award for short fiction, and the Chronogram Literary Fiction Award. Her plays and musicals have been produced in several countries as well as on NPR; her physics play Strings, nominated for an Innovative Theatre Award, was recently produced at the Kennedy Center. A Hawthornden Fellow, she is on the faculty of NYU and Gotham Writers, as well as the Cape Cod and San Miguel Writers’ Conferences. She enjoys outdoor sports such as hiking, biking, and horseback riding, and you can often find her cooking and hunting for wild mushrooms.